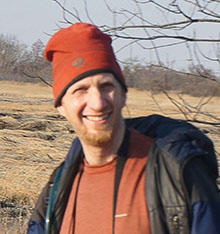 Paul Raphaelson is a Brooklyn, New York-based artist known for urban landscape photographs, usually made in liminal spaces between the residential and industrial, occupied and abandoned, domesticated and feral. He was the last photographer allowed access to Brooklyn’s historic Domino Sugar Refinery before its 2014 demolition; a book of this work was published in 2017. He has also photographed fragmented and disorienting views of the New York City Subway, and experimented with images and text (and text without images).

Lately, Raphaelson has strayed farther from his landscape and darkroom roots, while staying true to his love of exploration and intricate form. Results from recent experiments are coming soon.

Raphaelson’s work has been exhibited, published, and collected internationally.

If God did anything, he invented a shapelessness rigged to get sick of itself immediately.
This sadness evolved into human beings

who pit their meticulous fingers against various centuries.

—Catie Rosemurgy
from “Miss Peach and the Problem of Human Beauty”